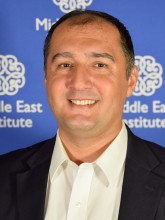 Alex Vatanka (الکس وطن خواه) specializes in Middle Eastern regional security affairs with a particular focus on Iran. From 2006 to 2010, he was the managing editor of Jane’s Islamic Affairs Analyst. From 2001 to 2006, he was a senior political analyst at Jane’s in London (UK) where he mainly covered the Middle East. Alex is also a senior fellow in Middle East Studies at the US Air Force Special Operations School (USAFSOS) at Hurlburt Field and teaches as an adjunct professor at DISAM at Wright-Patterson AFB.

He has lectured widely for both governmental and commercial audiences, including the US Departments of State and Defense, US intelligence agencies, US Congressional staff, and Middle Eastern energy firms.

Beyond Jane’s, the Middle East Institute and the Jamestown Foundation, he has written for such outlets as The Christian Science Monitor, Foreign Affairs, Americas Quarterly, CNN.com, Al Monitor, the Journal of International Security Affairs, BBC Persian Online, The National Interest, The World Today, PBS, Daily Beast, the Jerusalem Post, Journal of Democracy and the Council of Foreign Relations.

Born in Tehran, he is fluent in Farsi and Danish. He is the author of “Iran-Pakistan: Security, Diplomacy, and American Influence” (2015) and is presently working on his second book, “The Making of Iranian Foreign Policy: Contested Ideology, Personal Rivalries and the Domestic Struggle to Define Iran’s Place in the World.”

Pompeo Gives Trump an Ally on Iran Deal, But Only in Washington

Protests in Iran stretch into third day despite government warnings

Iran was at the forefront of the fight against ISIS. Now it has to face the militants at home.