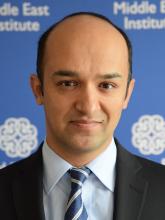 Ahmad Khalid Majidyar is a fellow and the director of IranObserved Project at the Middle East Institute.

From 2008 to 2015, Majidyar worked as a senior research associate at the American Enterprise Institute (AEI), where he co-authored two monographs on Iran: Iranian Influence in the Levant, Egypt, Iraq and Afghanistan (AEI 2012), and The Shi’ites of the Middle East: An Iranian fifth column? (AEI 2014). He also published a number of research papers on Iran, Afghanistan and Pakistan.

As an instructor with the Naval Postgraduate School’s Leadership Development and Education for Sustained Peace program (2008-2016), Majidyar provided graduate-level seminars to more than 3,000 U.S. and NATO military leaders on Afghanistan and the broader region. In addition, he has provided briefings on Iran and Afghanistan at the Defense Intelligence Agency, the Joint IED Defeat Organization, the National Defense University, the State Department, and Congress; and he has spoken as a guest analyst at think tanks, universities, and world affairs councils.

Previously, Majidyar worked as a media analyst with the BBC Monitoring in Afghanistan and as a humanitarian aid worker with the UNHCR in Pakistan.

Could Israel and Iran go to war in Syria?

Many Americans have never heard of the Haqqani network, one of the world's most lethal terror groups